Issue 1 of ANSYS Advantage magazine places the spotlight on the academic use of CFD and other ANSYS software.  Part of this issue is dedicated to student engineering competitions where students have the chance to use real-world engineering methods and tools such as CFD to design cutting-edge products, including race cars (FSAE) and solar passenger vehicles (World Solar Challenge).  Many of you may know that LEAP Australia has for years been a strong supporter of the University of New South Wales' Sydney-based Solar Racing Team - otherwise known as Sunswift - especially during the design and development of their latest car, Sunswift eVe. LEAP provides students with training and mentoring in CFD and FEA software, and helped implement effective CAD-to-CFD workflows and optimisation approaches in Workbench.

In this guest post, Dr. Graham Doig of UNSW's School of Mechanical and Manufacturing Engineering shares further insights into Sunswift's use of ANSYS CFD software to design what is one of the world's lowest-drag passenger vehicles. Dr. Doig is the academic supervisor for the race-winning, record-holding team - he teaches CFD and experimental aerodynamics as well as leading research at the Fluids Laboratory for Interdisciplinary Projects, and guided the core solar car aerodynamics crew of undergraduate engineers Pujith Vijayaratnam, James Keogh, Taryn Zhao and Matt Cruickshank, who were also mentored by former Formula One CFD engineer and Sunswift alumnus Dr. Sammy Diasinos of Macquarie University.

Sunswift is a student-run project to design and build solar racing cars. The flagship event for the solar car fraternity is the biennial World Solar Challenge (or WSC) rally, a silent gruelling zoom across outback Australia - 3000kms from Darwin in the Northern Territory to Adelaide in South Australia - using the power of the sun to propel an international assortment of between 40 and 50 vehicles ranging from the sleek to the wacky. Power is extremely limited, so aerodynamic efficiency is king.

Sunswift started out in the mid-1990's, and in recent years has had an astonishing run of success - in 2009 our one-seater prototype Sunswift IVy won its class in the WSC, repeating that feat in 2011 and breaking a Guinness World Record for the Fastest Solar-Powered Vehicle in the interim. Put simply, we felt we'd taken things as far as we could building the "traditional" spaceship-like vehicles that have dominated solar car racing in the modern era. Basically a wing covered in solar panels with shrouded wheels underneath, European and Japanese cars of this design with several times the budget of our Aussie underdogs had been able to use satellite-grade solar cells and expensive, cutting-edge battery technology to beat us comfortably in the overall standings, despite our class-leading outings with lower-powered silicon cell cars.

Students were able to rapidly evaluate pressure gradients on the car to identify areas of concern from one design iteration to the next. Avoiding sharp corners and junctions was vital, but the team still wanted the car to retain some of the aesthetic design features of a supercar. (image credit: Pujith Vijayaratnam, Lead CFD Engineer)

In 2012 we made a decision to lead the way down a new path. A long-gestating idea for a solar-powered supercar came to the fore when WSC created a class for "practical" vehicles featuring 4 wheels, convetional doors, space for passengers and some luggage too. A normal car with people sitting upright means a curvy roof - that's not ideal for pure solar power, so clever aerodynamic design was needed more than ever to squeeze every last drop out of the less than 1kw of power available. Sunswift eVe went from first napkin sketch to final CAD design in 6 months, using as many of the CAD and optimisation tools available in ANSYS Workbench as we could with a helping hand from LEAP Australia whenever we were in a bind.

Without development time for wind tunnel tests or a moving ground to make such tests accurate, our design of the previous car was conducted only in CFD using Fluent. It was such a success that we didn't hesitate to follow the same path this time for eVe, creating rapid-fire parametric models and using hybrid unstructured meshes to churn through over 50 major and minor design iterations in the space of about 3 months. In the process we cut the drag coefficient from the original 0.27 to something closer to 0.16, as predicted by our RANS simulations on half-car (symmetry) meshes of between 10 and 20 million cells. Since around 80% of the drag of an ultra-streamlined solar car comes from skin friction, wrapping a good inflation layer around the surface to capture the boundary layer was essential, and we were able to keep a low y+ value so that our turbulence models spat out results we could believe. We set up scripts in CFD-Post  that could read in our models and spit out detailed reports for each configuration, allowing quick and easy comparison of flow around the car to help us eliminate any separation or areas generating strong vortices. 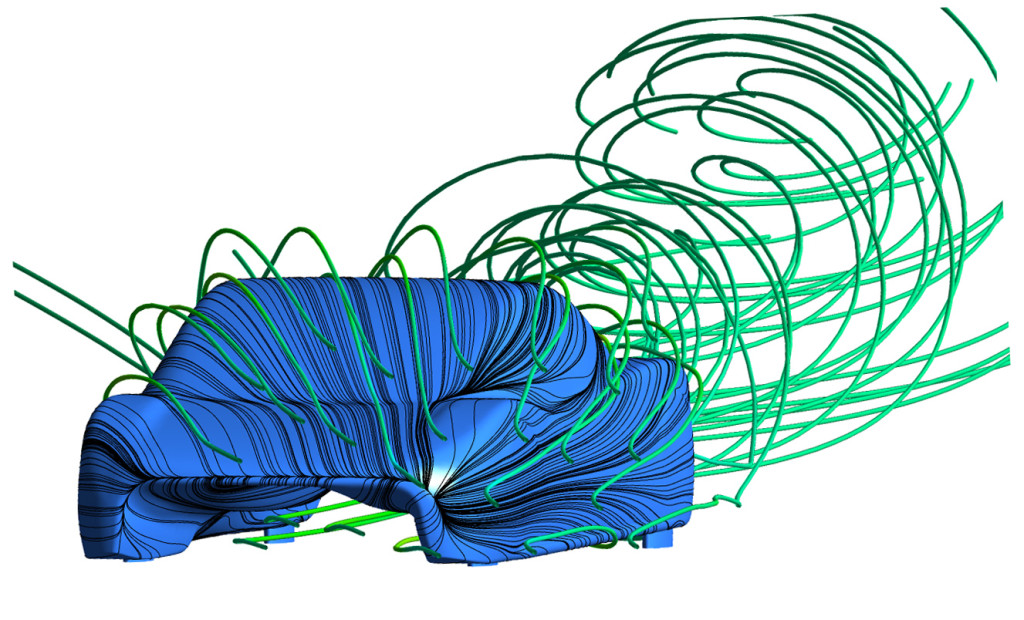 It can get exceptionally windy in outback Australia - in a wind tunnel, large crosswinds and gusts can be difficult to emulate - Fluent allowed the team to examine multiple possible crosswind scenarios to prepare them for how the car would handle and what power consumption would be like in challenging weather. (image credit: Pujith Vijayaratnam, Lead CFD Engineer)

Initially we had issues with too much downforce and some separation on the underside, as well as unwanted flow being pulled under the car from the sides due to high pressure differentials. The underside of the car, after all, is basically a giant inverted wing. Some lightbulb moments ("if we don't have an engine at the front, why would we even need all that frontal area there?), backed up with rapid remeshing and overnight HPC solutions, helped us solve problems in days instead of weeks. In turn this helped us (just!) make our build deadlines for the ultra-lightweight carbon fibre shell. We made a handful of aerodynamic compromises for the sake of aesthetics (we wanted people to really want this car, after all!), but were able to quantify the changes through more simulation so we could base our power consumption strategies for the race around reliable lift and drag numbers.

Sunswift eVe performed like a thoroughbred racer on the World Solar Challenge in October 2013 - after a slow start due to mechanical issues caused by a lack of testing time, eVe was up to speed on day 2, and came storming through the field past competitors from the USA, Germany and the Netherlands. Her top recorded speed was 128km/h in the Northern Territory, and she comfortably cruised at highway speeds through most of South Australia, surprising even the team with her fine handling and low power consumption. We even got some unexpected real-world flow visualisation in a dust storm near Coober Pedy! Sure enough, in gusty conditions, the vortex forming off the C-pillar wasn't far off the path that Fluent had predicted when we made animations in CFD-Post. 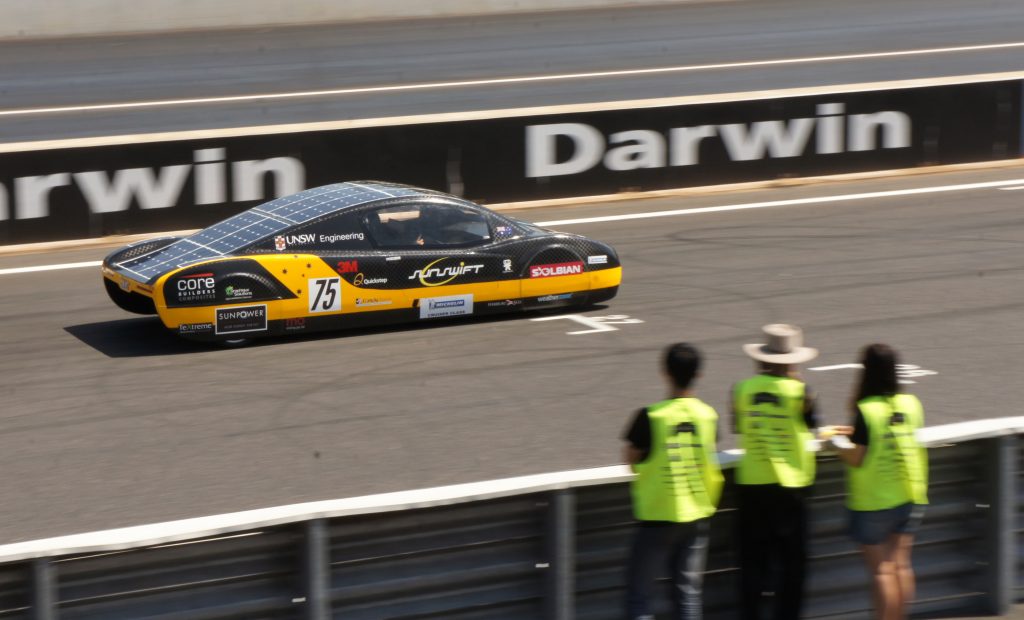 Sunswift eVe's top speed in the race was almost 130km/h - a balance was found such that the car would never lift off the ground but she also didn't produce so much downforce that the tyres would wear out too quickly. (image credit: Graham Doig, Academic Supervisor)

The team won class line-honours by being first and fastest to Adelaide. Although they weren't crowned overall winners thanks to a convoluted scoring system taking factors like passenger-kilometres and luggage space into account to favour slower, bulkier vehicles, the team were proud to say they were the only car that made it to their daily stage destination on every single day of the race. There's no higher goal for a practical road vehicle than that! The team is currently gearing up for an assault on a new world speed record later this year, and so a new team of undergrads is back in Fluent chasing every last drag count for that - this time we're using the cut-cell meshing technique and even finer meshes to get the best possible accuracy now that our CFD is validated against real-world performance.