…and can Australia harness reverse swing effectively in the 2019 Ashes?

In the world of cricket, reverse swing bowling is a much talked-about topic but often misunderstood. With the much anticipated 2019 Ashes cricket series between Australia and England beginning this week, and likely bowling conditions (and with changes to the seams on the new Duke balls) expected to be conducive to reverse-swing, at LEAP we are particularly excited to see which team can best harness reverse-swing to optimal effect.

The aerodynamics of a cricket ball has been well studied over many years – among many papers, R.D. Mehta provides an excellent summary of the ‘Fluid Mechanics of Cricket Ball Swing’ at this link as well as a growing body of work using computational fluid dynamics (CFD) software such as ANSYS.

In a nutshell, swing bowling is the ability for medium and fast pace bowlers to make a cricket ball deviate laterally in fight to either beat the batsman’s bat completely or move the ball enough to only contact the edge of the bat (which can then be caught by the wicketkeeper or within the slips cordon).  Conventional swing bowling is most effective while the ball is still relatively new and the seam remains prominent (typically within the first 20-30 overs) – an angled seam trips the airflow on that side to form a turbulent boundary layer, while on the other side the flow remains laminar– this leads to a difference in flow separation points on each side, a difference in pressure and thus a lateral side force.  Key variables include the prominence of the seam, the angle of the seam to the flow and (over time) roughing of the ball on one side (which adds further to the turbulence and the uneven separation points / pressure on opposing sides).  The net effect is that the trajectory of swing is towards the seam direction (and towards the roughest side of the ball). 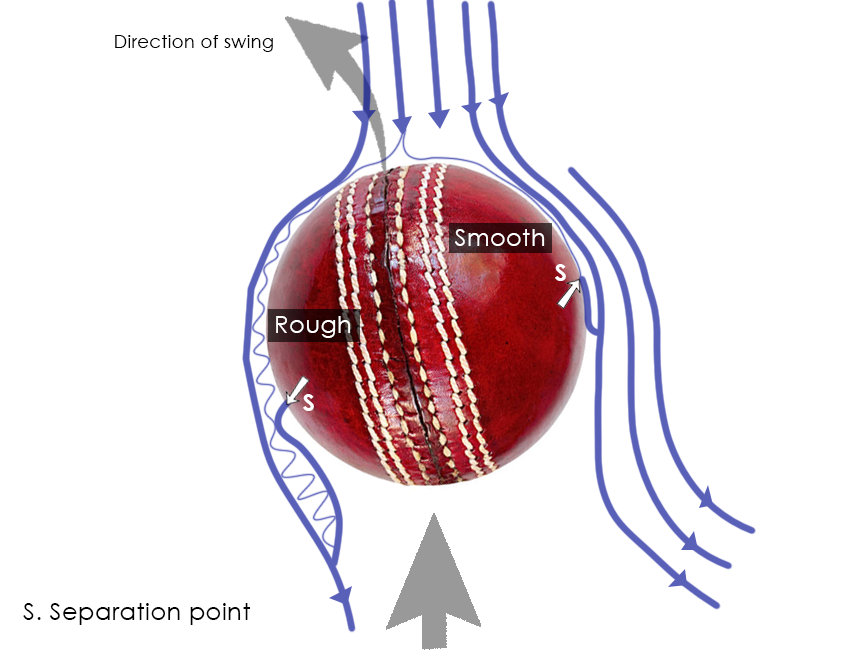 Historically, once the ball was over 30 overs old, it softened and the seam flattened, providing more attractive conditions for a batsman (until the ball is then replaced after 80 overs). In more recent times, entire cricket series have been decided by the ability of a team to get an older ball to reverse-swing – where a bowler can approach with the same bowling action but get the ball to move in completely opposite lateral direction to which the batsman expects it – and in some cases this has made the period where a batsman is facing an older roughed-up ball to be even more menacing than facing a brand new ball.  So how does reverse swing work exactly? 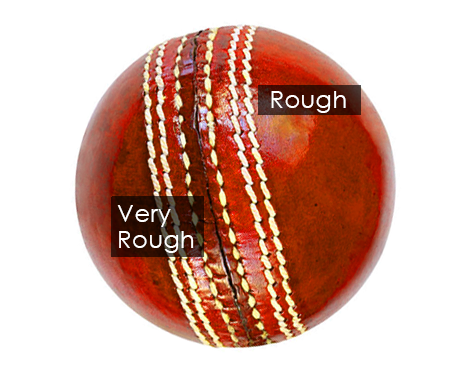 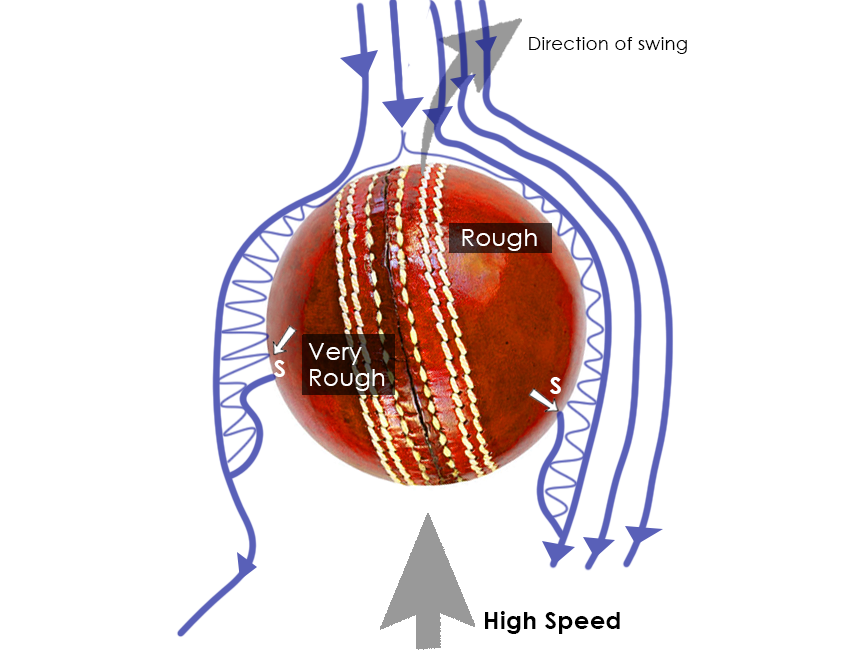 When using an older ball that is in suitable condition to allow reverse swing, the lateral movement will be in the opposite direction to that expected by the batsman (for a typical seam position used in conventional swing bowling).  In this case, the important physics is that you will now have sides of the ball which are rough and very rough – so there is no longer any significant laminar flow, but instead turbulent flow on both sides of the ball.  The seam again trips the air into a turbulent state, which is amplified further by the very rough surface on that side of the ball and flow separation occurs even earlier.  On the other side (merely ‘rough’ side), the turbulent air has a relatively more delayed separation point, which creates the uneven separation and uneven pressure to a side-force and the conditions for swing - but this time the lateral force is acting in the opposite direction to that seen in conventional swing (away from the seam). Thus, in reverse swing the trajectory of swing is now away from the seam direction (and away from the roughest side of the ball).

So in summary, the differences between conventional and reverse swing lie in differences in flow separation on each side of the ball (for the same seam position) as the ball deteriorates during the game: 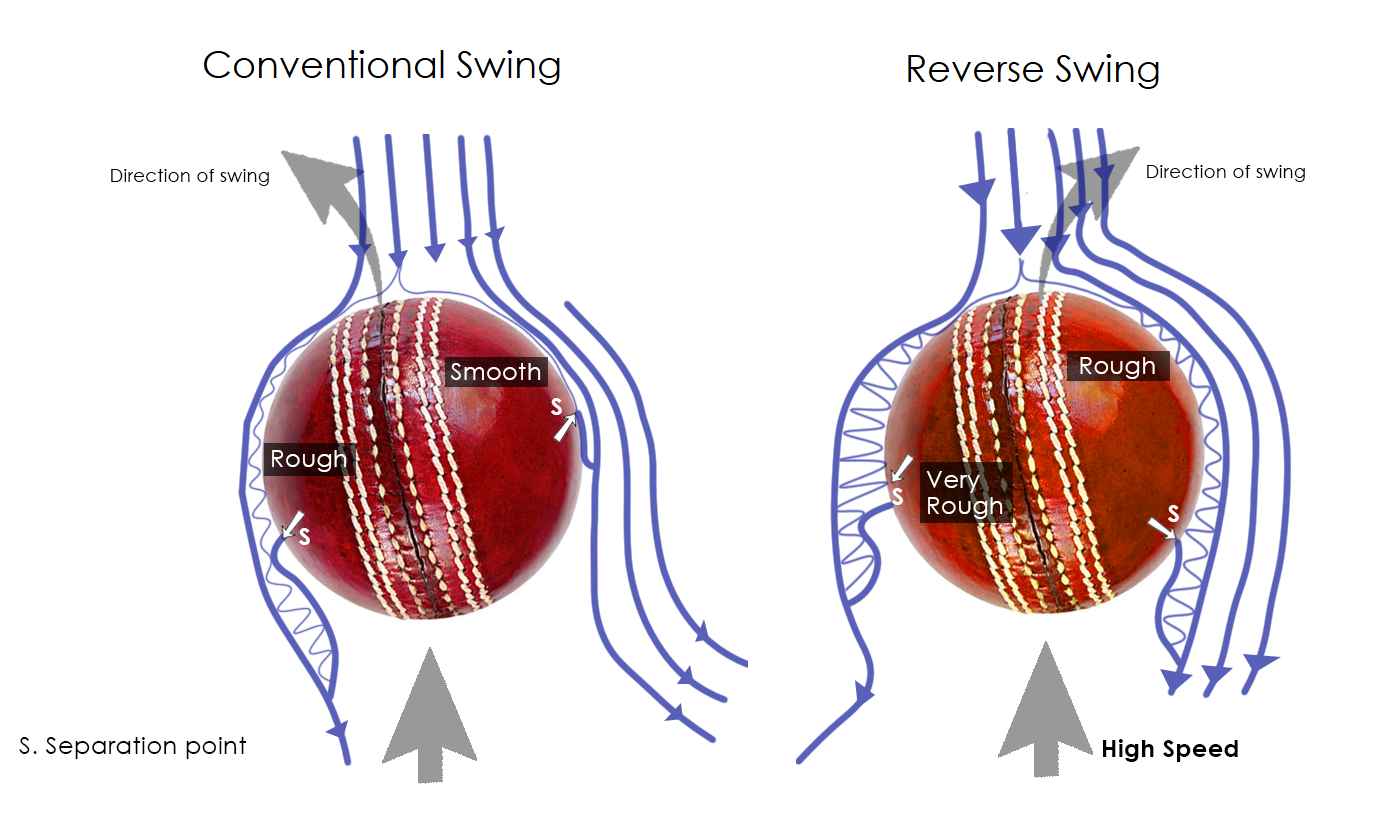 In practice, this means that in the right conditions and with a suitable scuffed-up ball (due to natural ‘wear and tear’ only of course!), a fast bowler can bamboozle the batsman by delivering a series of balls exhibiting more subtle conventional swing (typically these are gentle outswingers to lull the batsman into a false sense of security) which are then followed (without any warning or visible deviation in bowling action) by an almost unplayable ball that reverse swings aggressively in the opposite direction (typically an in-swinger attacking the stumps).

Here is one example (painful as it may be for Australian cricket fans):

In order for a CFD engineer to accurately predict the separation points on a cricket ball in flight, we must consider the following:

In his published research on the ”Simulation of Reverse Swing of the Cricket Ball”, D.G. Pahinkar used ANSYS Fluent to demonstrate these two swinging scenarios and quantify the pressure differences and resulting side forces that would occur during both conventional and reverse swing. How does our use of CFD add value to this research and help us understand the science behind reverse swing bowling?  Firstly, CFD offers incredible visualisation of complex flowfields, helping us to easily identify uneven turbulence and flow separation around a cricket ball. CFD then allows us to gauge the pressure differences between the rough and super-rough sides of ball, and quantify the magnitude of side-forces generated under a variety of conditions (variations in seam prominence, seam angle, roughness values and differences in roughness between each side of the ball). 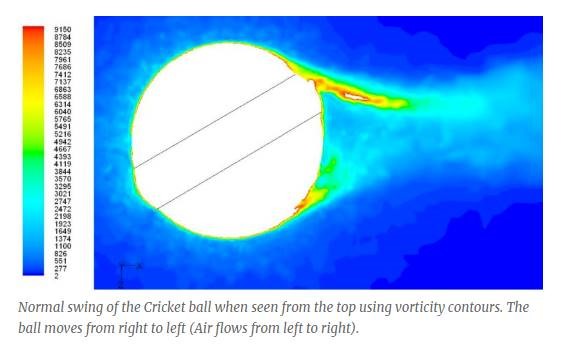 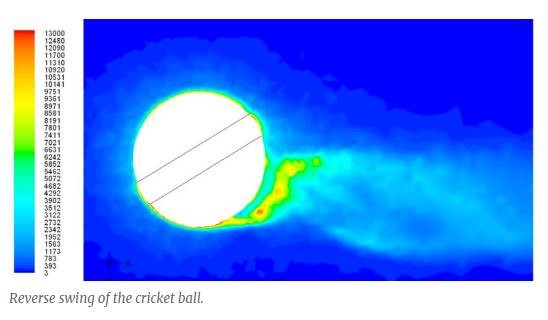 For a deeper dive into the CFD modelling he competed and his results, we encourage you to also read Pahinkar’s full paper on this topic and in particular some of his conclusions regarding variation in separation points and the increase in side-force with ball speed and roughness height, with some key results outlined here: 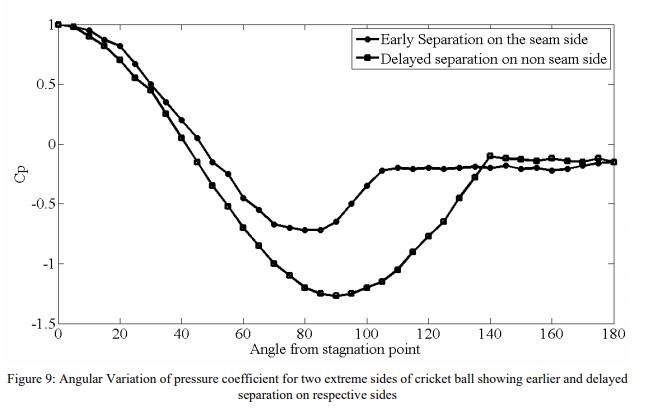 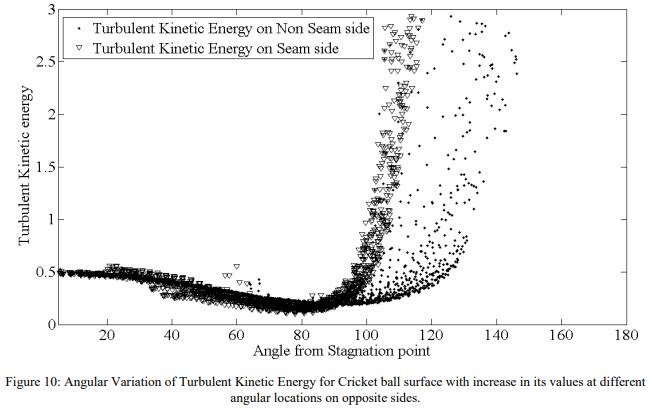 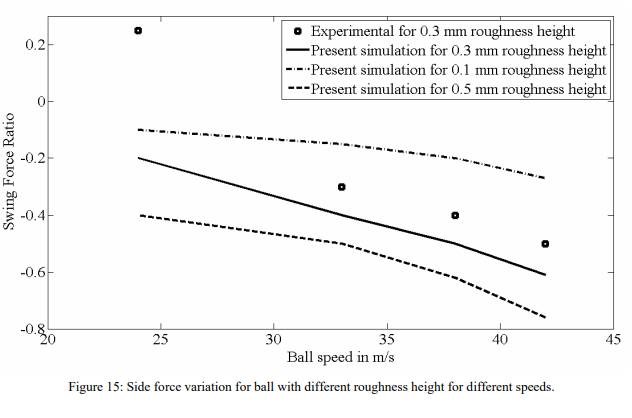 In the meantime, let’s all hope for a 2019 Ashes series that is competitive & evenly poised through the series, and presents a well-matched battle between both bat and ball (and without any glimpses of sandpaper, save for what is brought for display by the Barmy Army and other English supporters!).

Do you have an interesting fluid dynamics problem at your own work? Talk to a local LEAP expert today - click here to setup a no-obligation discussion at one of our offices around Australia & New Zealand.