LEAP and ANSYS congratulates Emirates Team New Zealand for their remarkable victory in the 2017 America’s Cup in Bermuda. 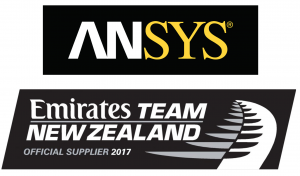 ANSYS, as Official Supplier of Aerodynamic CFD software, Finite Element Analysis software and Multiphysics analysis platform to Emirates Team New Zealand for their winning 2017 campaign, are incredibly proud of their long-standing affiliation with the team - which has now lasted for over 20 years, back when the advent of turbulence transition modelling in CFX became a key driver of Team New Zealand’s superior hydrodynamic designs during their original 1995 victory and subsequent 2000 successful title defence.

As advocates of a culture of perpetual innovation through digital prototyping, everyone here at LEAP commends Emirates Team New Zealand on this remarkable achievement in securing the 2017 America's Cup – achieved notably against the odds and with a lower budget than other well-funded competitors (including their closest rivals, funded by Oracle billionaire Larry Ellison).

Grant Dalton (CEO, ETNZ) acknowledged that they were forced to “think outside the square”. He knew that “we couldn’t out-spend other teams here so we had to out-think everyone. This time round we had no restrictions on design. We just wanted to see what we could come up with and we have achieved some truly amazing things that have been revolutionary in this sport… we had to invest in technology and the people that provide it.”

With no motors on board and a need to pressurise the hydraulics that control the wing mainsail and daggerboards, much has already been reported on the innovation introduced by ETNZ’s “cyclor” grinding system – an advantage that was particularly evident in low-wind conditions when the team implemented lots of manoeuvres.  However, missing from this discussion so far has been the incredible engineering feats that the team achieved with the design of their composite wing mainsail – giving their skipper greater control and optimum boat speed when it counted most.

With a number of rule changes implemented for the 2017 campaign (for instance, specifications required the hull shapes to be common amongst all teams), ETNZ were looking to exploit any advantage they could.  They identified that while the outside shape of the wing mainsail was specified by the rules, control systems on the wing mainsail could vary the bottom corner by +/- 20 degrees and the performance of this twisted shape would be heavily influenced by the:

Emirates Team New Zealand Skipper, Glenn Ashby, agrees: “I think we’ve seen some unbelievable advancements here with the boats and the type of races we’ve seen and it’s great for our sport. From a sailing perspective, it’s going to be hard to sail anything else after what we’ve seen in these boats, the technology is just absolutely amazing.”

You can learn more about the engineering and simulation work that is done behind the scenes at Emirates Team New Zealand in these video interviews from the 2013 campaign:

And we’ll leave the final word to the engineers at ETNZ themselves (you can read the full story here):

“Using ANSYS fluid–structure (FSI) multiphysics and composites simulation, ETNZ is able to virtually test hundreds of variations early in the process to find the optimal design before performing any physical testing.”

“Without ANSYS software, it would have been impossible to improve designs at the pace required in this intense development environment. We're going to need that competitive edge as we're preparing for the America's Cup.”