At any given moment around the world there are 100 million passengers travelling on a train, a striking figure which has been projected to double again over the coming decade.  I suspect that as you become more immersed in the world of CFD/simulations, you also become increasingly adept at looking around you and identifying aspects of your everyday life which have been impacted by engineering simulation (or aspects which should be!).  Especially if you work in the Rail industry, your daily routine is now riddled with examples of how CFD has improved both your comfort and safety during your daily commute.

Ventilation systems are a critical component in large rail tunnels, typically consisting of longitudinal jet fans that are placed at several carefully chosen positions along the tunnel. However, engineers must consider that jet fan performance can be disrupted by the motion of trains travelling through the tunnel at up to 350 km/h (218 mph), with complex flow patterns forming including pressure waves that propagate throughout the tunnel (and complex flow interactions occurring at entry and exits).

Traditionally, 1D or 2D tools have been used to estimate the average pressures inside these long tunnels (5km+), but best-practice design is now moving towards 3D CFD transient simulations to more accurately predict the flow distribution, velocity components and magnitude in each tunnel section, allowing for more accurate jet fan sizing (which can save millions of dollars in unnecessary upfront costs, and ongoing running costs for incorrectly sized fans). Read more here. 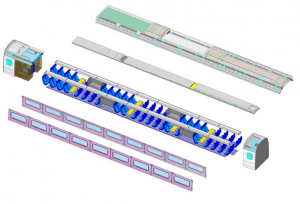 Regulations and customer demands put increasing pressure on train designers to deliver high-levels of thermal comfort. In the past, rail engineers would typically have spent four months testing their passenger carriages in an expensive climate-controlled wind tunnel to validate their HVAC system.

This recent article talks about how Siemens has been using ANSYS CFD to meet the strict new EU Rail HVAC regulations: they have found that their simulation results have agreed so well with test measurements that, in future, Siemens engineers will being relying entirely on ANSYS CFD to demonstrate compliance with these strict new European regulations. In this article, Siemens engineers estimated that ANSYS CFD simulation saved them up to 50 percent in reduced time and physical testing on this project. Read more here. 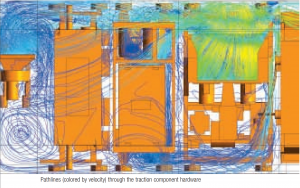 In a world increasingly impacted by climate change, rail engineers must also design any new rail equipment (which often has an expected lifetimes of 20+ years) to handle more extreme weather events. In winter storms, snow can swirl up and accumulate in the cooling air channels of individual rail cars, which reduces or completely blocks the intake duct and effects the amount of outside air that can be taken in to cool the cars. Consequently, the temperature rises both in the cars and under the floors, which can result on failure of traction system components (such as the main air compressor, traction converter, traction converter cooler, exhaust air unit and cooling fan of the traction bogie), ultimately leading to shutdown of the train.  Read more about how CFD engineers at Siemens and Friedrich-Alexander University re-designed their ventilation strategy to include an air intake on the roof and ensure effective cooling of traction components located under the floors.

Looking into the future of high-speed transport - Hyperloop capsule aerodynamics:

First proposed by visionary entrepreneur Elon Musk, the hyperloop is a revolutionary high-speed mass transit system that will transport goods and people between cities at close to the speed of sound while seated in capsules that run inside long tubelines (at a near vaccuum).

Advanced engineering simulation software from ANSYS is being used by various engineering teams to precisely predict the performance of concept designs, letting engineers examine the complex physics of the hyperloop in virtual tests before expensive prototypes/test-tracks are manufactured.

Here are some additional insights from ANSYS on the important role simulation will play in Hyperloop design.