We will now focus on Turbulence Modelling, which is a critical area for any engineer involved with industrial CFD.  There are a number of different approaches so it is important that you have solid grounding in this area to enable you to choose the appropriate model for your simulation requirements.  It is worth noting that in August 2012, LEAP will be hosting Dr. Florian Menter to run a series of Advanced Turbulence Training courses in Melbourne, Sydney and Perth.  Dr. Menter is a world recognised expert in turbulence modelling, and more information on his visit to Australia can be found here.

The ANSYS CFD Solvers solve the Navier Stokes and conservation equations, but as direct solutions are not possible to resolve for any flows of an industrial Reynolds number then we need to do some modelling, as opposed to resolving the values directly.

The equations that we used are not closed and so we need to use Turbulence Modelling to close the equation set and then iterate towards a solution.  We can use what is called a Reynolds Averaged Navier Stokes (RANS) approach, or we can use an Eddy Simulation technique which resolves the larger eddies in the flow and is only really required when you have separation or large recirculating regions.

The most commonly used models are the RANS models due to their low cost in terms of compute power and run times.  The Eddy Simulation methods can be quite mesh sensitive but will yield much better results for separated and recirculating flow, albeit over much longer run times.

The RANS models apply a Reynolds decomposition technique to the Navier Stokes equations which breaks the velocity down into its mean and fluctuating components.  This decomposition leaves us with one unknown value, which is termed the Reynolds Stress.  We use Turbulence Models to resolve the Reynold’s Stress and close the equation set.  There are two ways we can go about resolving this, the first (and most commonly used approach) is to use an isotropic value for the turbulent viscosity value which is called the an Eddy Viscosity Model, the other way is to solve using the Reynolds Stress Model (RSM) for the 6 separate Reynolds Stresses, which results in an anisotropic solution.

The limitation with Eddy Viscosity models is that they use an isotropic value which may not be appropriate and hence can increase the diffusion in your result.  Obviously solving for the 6 Reynolds Stresses and dissipation will be more accurate, but you are then solving extra equations which will increase your run time considerably.  There are further modifications to the 2 equation Eddy Viscosity models that yield similar results to RSM which I will elaborate on soon.

I have listed below the most commonly used Eddy Viscosity turbulence models over the past ten or so years and the intended use behind their development.

The common options are:

Note: Modifications for Curvature Correction to the SST model give comparable results to RSM and the SST model also works very well with the Transition Model now available in CFX and FLUENT.

Options like Curvature Correction are very useful in tackling problems where previously you would have required an RSM model.  The Transition Models can be of benefit also, depending on your application and give much better drag prediction as they will maintain laminar flow along a body and develop natural transition points, as well as calculate regions of bypass transition. I won’t discuss these here, but there is extensive information in the ANSYS User Guides.  These additional options are available in ANSYS CFX and ANSYS FLUENT.

The Reynolds Stress models were used widely for high swirling flows, for example, the flow in a cyclone separator.  In the past we would use the RSM models for this type of flow, but nowadays you should use the SST model with the Curvature Correction model enabled.

The more advanced options for resolving turbulence are the simulation based models.  These generally require much better mesh resolution and involve much longer run times as they can only be run as an unsteady simulation.  These are used primarily for resolving large scale separations and recirculating regions.

The Scale Adaptive Simulation is the best point to start when stepping up from a RANS modelling analysis.  The Scale Adaptive Simulation is based on an unsteady SST RANS model but calculates the local length scales and resolves accordingly.  The advantage of this is that it can be run on a good quality RANS mesh without any additional meshing requirements.  For some flow behaviours this has been shown to give very similar results to Large Eddy Simulation (LES) and Detached Eddy Simulation (DES).  This is why we would recommend this as a starting point for unsteady simulations with separated or recirculating flows, and as a good alternative to an unsteady RANS SST simulation. 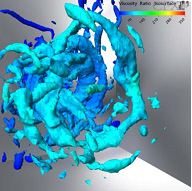 SAS solution in a Swirl Combustor 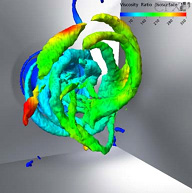 DES solution in a Swirl Combustor

Large Eddy Simulation is the most expensive of the three simulation options and requires a very fine grid to accurately resolve the eddies, especially in the boundary layer.  Once the eddies are too small to be resolved by the grid, they fall back into a sub-grid model.  As this sub-grid model is used only to resolve the smallest eddies which tend to have more universal properties, this yields very accurate results, but because of the large mesh requirements this is not a commonly used approach in industrial settings.

We can now use LES in specific regions of the mesh only using Embedded LES.  This means that we can run an unsteady RANS in the bulk of the flow and a full LES calculation in only the required separated regions hence making it more practical for industrial use.

Each of these simulation methods when used correctly will yield a better result than the steady state or unsteady RANS models for separated flow or recirculating flow behaviour but it is more expensive to do so.

As far as Turbulence Models are concerned, the SST is a good default choice for most flow problems.  Please contact our Technical Support Team if you would like to discuss your flow problem and the options available to you.   If you are interested in attending the Advanced Turbulence Training courses by Dr. Florian Menter, more information can be found here.

In the next blog post we will look at the importance of the y+ value and discuss the use of appropriate values for the different turbulence models.